Let us realise the dream car you want -  If you have a project in mind, and want to outsource some, or all of the work, then Balance Motorsport can  help. We can -

- Supply all the  parts you need

and on just one industrial estate, we can outsource elements we can't do in house including  - TIG welding, Glassfibre, Carbon Fibre  & Interior Trimming

Get in touch  if you want a Race Car,  Fast Road special, Trackcar, or Restomod.

OUR OWN PROJECTS ARE UNFUNDED AND HAPPEN IN SPARE TIME ONLY. so please bear with us!

A pipedream or a real project? Well the engine is in but nothing else has happened. Too busy speaking to customers :-)

250 HP T-JET PANDA to compete in up to 2.0 class. Sometime in the future....hopefully while petrol is still available.... 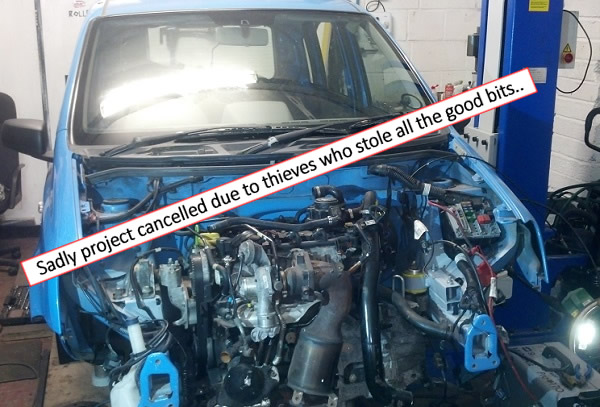 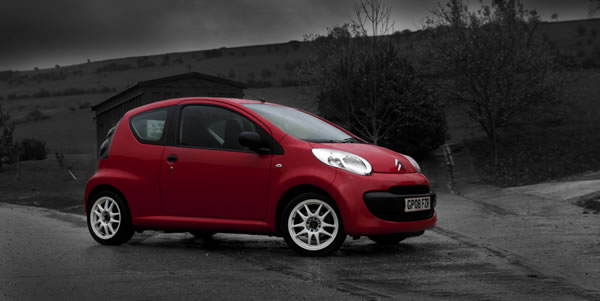 This project car is now sold but if you want a conversion then just get in touch.

Here is what the current owner of the car said to Julian, the designer of the project, when he got it home "the car is bloody fantastic :). It's everything I hoped it would be and it's certainly lived up to the idea I had in my head. I don't know whether you did it by design or accident, but it really does feel like it's two cars in one; you can stay off the turbo and it'll happily pootle about as if it was standard, or put your foot down and its a basically a modern 205 GTI. As you can tell, I'm impressed! " 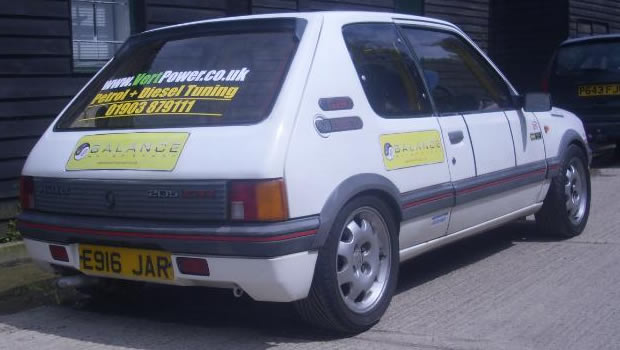 Balance Motorsport have been testing numerous tuning products on a Peugeot 205 GTI 1.9. Driven by the owner this car won its class in the All Circuit Sprint Championship in 2004 . For 2005-2008 rather than actively compete we decided to use Sprints as a basis of measuring the performance increases of various tuning modifications.

Motorsport unlike many sports favours the affluent. Quite frankly it's a lot easier if you have lots of money, and an uphill struggle on a small budget. Even series with tightly controlled regulations see a wide margin from front runner to back marker and more often than not the budgets are a mirror image of grid position. With this project car we tried to spend as little as possible and use as many OE products as possible. This might go against the grain however on many occasion the car came up against much more expensive machinery and was quicker. We've tried to separate each stage of modification into clear cut areas - eg handling, more power.

After each modification a Sprint at Lydden Hill was  undertaken to see what the real world increase of these modifications was. The first thing that would spring to peoples minds would be how can we know it is the modification and not just better driving? Well I had been sprinting for more than a year and had reached a point with the standard car, where any further improvements in time were very difficult to achieve. Effectively I'd become pretty consistent at my current skill level so this meant the modifications stood a good chance of being fairly assessed (as long as no Tuition was sought in between - that wouldn't be comparable!)

The standard car was an excellent choice for standard production sprints and was surprisingly quick round a track without any modifications. On the road it felt like the proverbial roller skate with the legendary handling, engine, gearbox etc. On the track too much body roll and occassionally it would overheat but apart from this, this completely standard 205 could post very respectable times. As a guide a modified  Renault Clio Sport 182 at the time was posting around 92 seconds and a Porsche 944 around 92.5 seconds. Considering it cost £1000 not a bad result! 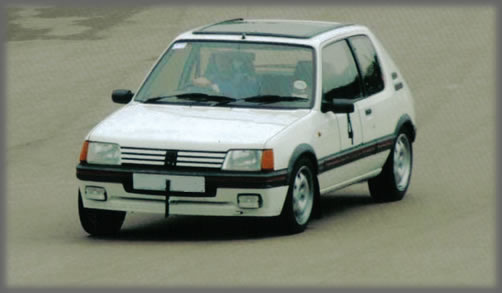 The difference in performance with this weight reduction was amazing. Losing some 65 kg even after installing the cage the car accelerated much more quickly and cornered better too. Unfortunately the weight reduction did raise the rear ride height and the car was skating about a lot through excess roll. You can see the outside edges of the tyres working. 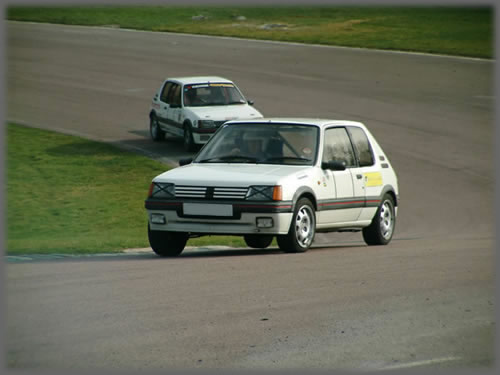 The biggest problem with the car was the amount of body roll. This was causing positive camber mid corner and either severe understeer or oversteer. It was all fairly controllable but not very confidence inspiring. By tightening up the suspension and limiting the amount of bump and droop a quicker reacting car was the result. It rolled less and it's attitude was now one of controllable oversteer rather than wasteful understeer. Now the limiting factor was the tyres. Strictly speaking a new set of pre-scrubbed tyres should have been used before each test but this is supposed to be a budget conscious program. You can see in the picture the tyres working less on the outside edge. The 309 wishbone has added some static negative camber and the extra castor brings dynamic camber the outside wheel is staying almost vertical now under load maximising grip on this heavily loaded tyre. Conversely on inside tyre the increased castor is increasing favourable positive camber.. Please note the Speedline front wheels were fitted for this trackday and not used for the sprint data below which was from Lydden Sept 2005.

Before embarking on the next round of modifications it seemed prudent to test the car. Out of the saddle for nearly two years it was important to check that both the car and driver were capable of equaling the previous best time achieved in September 2005. The only change to the car has been to replace the Kumho tyres with some Goodyear GSD3. These were purchased a year ago now and the car has been in daily use so they were "scrubbed" the economy way. It's usually best for track use to have no more than 3-4mm of tread. On track they did feel grippier than the Kumho tyres (which were virtually bald at the last sprint in fact so bad they couldn't be used on the drive there!) but with nearly new tread levels the outright grip levels were probably similar. The good news is the time achieved on the final run was within 2 tenths of a second of the previous best. Considering our driver had put on some 10 kg in weight and was a bit rusty I think we can safely say the Goodyears added a bit of speed but not enough to consider them a modification in themselves. Generally speaking only by changing from list 1a to list 1b (MSA blue book speak) can big improvements in grip be found. Typical list 1b tyres include Yokohama A048 and Toyo R888. Later in the year we will be testing this type of tyre with larger wheels.

As a guide to the performance of the car here are some times achieved on the day...as you can see the Peugeot with it's measily 120hp and limited modifications is pretty close to some much more exotic machinery.

For this sprint we finally completed the remote mount turbo charger system. (right click and save as). Many strange looks from people which was to be expected i don't think anyone had ever seen a turbo hanging where the rear silencer used to be. In answer to your first thought - no there isn't any lag and it spools up quickly !

Why remote mount? Well the 205 1.9 engine wasn't designed for big boost and turbo heat it's open block design, poor chamber design and non-sodium filled exhaust valves see to that. Therefore we decided to look at remote mounting. Unfortunately the ideal place near the c of g longditudal location and below (i.e under the gearstick) offered no space. We decided to move the compressor further back. In the end the removal of the rear silencer saved some weight and meant the net weight gain of adding the turbo at the rear instead of in the front was less. Plenty of aircraft, bikes and cars dating back to the 80's have mounted turbochargers below the sump level which presents a challenge with scavenging the oil. Much like a dry sump relocates oil from the harsh environment of the engine, remote mounting a turbo protects the engine from it's huge heat soak and complicated plumbing with limited space.

Ultimately the best place for a turbo is often in the engine bay but remote mounting whether at the end of the downpipe, in place of the centre silencer or rear mount turbo in place of the rear silencer offers flexibility, lower cost and also benefits for racing with lower weight, lower c of g and cooler running.

For the initial sprint the car was not rolling roaded - it was operated with no dump valve, no intercooler and no bleed valve and ran just 0.38 bar (approx 165hp). The performance figures so far (drag strip will confirm in future) are 0-60  sub 6 and 30-70 around 4.5 seconds. The car is very quick and by keeping standard compression there is no lag with quick spool from 1500rpm.

Since then the car has been rolling roaded and offers 176hp at 0.5 bar of boost.

These Vertpower conversions aim to offer a blend of performance with environmental conscience as the intention will be widespead installs to take advantage of bioethanol on smaller engined cars. Preferably older cars as they already exist therefore the biggest chunk of CO2 is eliminated. The 205 has actually improved light throttle economy with the compressor making up for the otto cycle engines inherent deficiency of operation below full throttle. Don't get me wrong though. I'm not about to suggest diesels are better....

The extra horsepower has made the biggest difference in time reduction so far. However before you say you want more power if you look at the reduction for both lightening and suspension and cage compared to power that still brought a bigger gain.

On it's own power is nothing - it's how the car lays it down. With 0.38 bar of boost (now tested up to 0.5 bar with intercooler) the car handles it well. The performance is better than expected for 170hp due to the rise in torque which makes more of an impact to acceleration than mere hp.

So the verdict echoes the company ethos - do things in stages, make sure you have a stable platform before adding power and when you want to add more power look for more grip. In short keep things balanced..

BOOK YOUR CAR IN FOR SOME WELL JUDGED PERFORMANCE MODIFICATIONS TODAY!